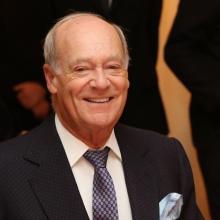 Born in Geneva into the ancient Aga Khan family, he is the younger brother of Aga Khan IV. Son of Prince Ali Khan, he graduated from Harvard.
He continued his studies at the New England Conservatory in Boston before working at the United Nations.
Since 2006, he has been Chairman of the Executive Committee of the Aga Khan Fund for Economic Development (AKFED) and Chairman of the Board of the Aga Khan Museum.
He was, in various capacities, a member of the Louvre’s Acquisitions committee, a trustee of the World Monuments fund and Director of the Silk Road Project. 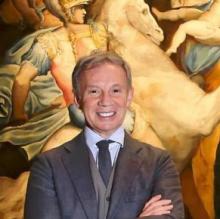 Born in Normandy, he studied philosophy and art history at the Universities of Caen, Nanterre, la Sorbonne and the Ecole du Louvre in Paris.
A former Focillon Fellow at Yale University, Kress Fellow at CASVA in Washington DC, and Curatorial Getty Fellow at the Getty Research Centre in Los Angeles, he directs the Musèe Girodet in France, the Château and the Blois Museum. A 19th century specialist, he is curator of numerous exhibitions in Europe and the United States. 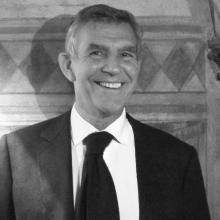 Descendant of an ancient Genoese family, he boasts a long experience in the business and financial field, in Italy and abroad. He is ambassador of Genoa in the world, Councillor of the Fabbriceria of the Basilica di Santa Maria Assunta in Carignano, member of international associations such as Bibliophiles François and Association Internationale de Bibliophilie. A music lover and collector, he is involved in supporting institutions operating in the world of contemporary art, such as the Castello di Rivoli.

Tourism and trade entrepreneur, Honorary Consul of South Africa in Genoa (2003-2019), since 2018 Ambassador of Genoa in the World. Former President of ASD Genova Boccadasse (2018-2022), since 2022 he has chaired the Istituto del Nastro Azzurro and the Associazione Nazionale Volontari di Guerra di Genova. He is a member of numerous Italian and foreign associations with prominent roles. Son of the great violinist Renato De Barbieri, he passes on and keeps alive his father’s work so closely linked to that of Paganini and the Premio, which he helped to found. 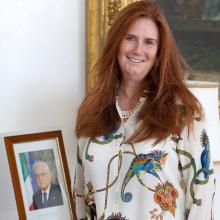 After graduating with honours in 1984 in Political Science, specialising in international affairs, from 'LUISS' University in Rome, she entered the diplomatic career in 1987. In 2008, she was appointed Director of the Diplomatic Institute, the first woman to head the Foreign Ministry's training school. In 2015, after serving as Italian Ambassador in Zagreb, she was appointed Diplomatic Advisor to the President of the Republic, the first woman to hold this position. From 10 October 2022, she is Ambassador of Italy to France.

Former President of the Equal Opportunities Committee of the Farnesina, for her assiduous commitment in favour of women, in Italy and abroad, she was awarded the Minerva Prize "To International Relations" and in 2016 she received the "Mela d'Oro" from the Marisa Bellisario Foundation. 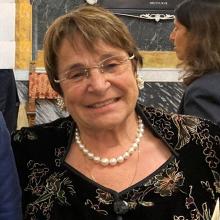 Born in Pisa where she graduated in Political Science. She moved to Genoa and took part in the city’s problems with a civic spirit; she immediately took an active interest in Genoa’s cultural reality; she has followed the Premio Paganini with passion since 1981. She currently holds the position of CEO of DEREF S.p.A., as well as of the Social Promotion Association GenovaFa. She has been Vice President of the Clotilde Cancer Therapy Fund since 1981; a member and Past President of the Rotary Club of Genova Ovest. 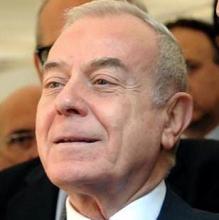 A journalist and politician, former Vice President and Editorial Director of Fininvest Comunicazioni, he has been Undersecretary of State to the Prime Minister's Office several times. Awarded the honours of Knight of the Grand Cross, Knight of the Legion of Honour and Knight of the Order Piano. His commitment in the cultural and social field is well known, widely recognized both in Italy and abroad. He currently chairs the Civita Association. 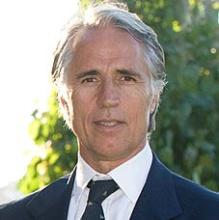 Entrepreneur, sports executive, CONI president and individual member of the International Olympic Committee. He currently chairs the Milano Cortina 2026 Foundation; he is also a member of the Olympic Program Commission and the Los Angeles 2028 Coordination Commission. Member of the Jury of the Guido Carli Foundation, of the Advisory Board of Agenda Sant'Egidio, Honorary Member and Board Member of AIL and Board Member of UNICEF Italy. Awarded the Stella D'Oro al Merito Sportivo. A collector and patron, he has always supported young people and the world of culture and art. 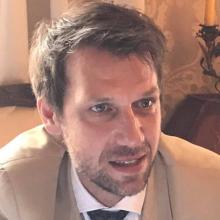 Descended of an ancient Genoese family, he has cultivated a passion for music since he was a child. He began studying the piano when he was only 6 years old. He attended the Germanic School of Genoa and later the German college. He has a long experience in the music and recording sector, as well as in the publishing sector, publishing numerous records and books, in Italy and abroad. He plays and composes, collaborating with artists and musicians on the international scene. In addition to working in the real estate and wine sector, he is involved in social work as president of a charitable foundation. 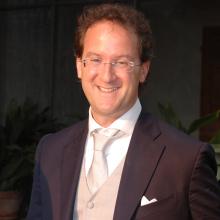 Niccolò Paganini, a direct descendant of the musician of the same name, studied violin, composition and choir conducting at the Conservatory of Music in Parma. He obtained a degree in Modern Literature with a musicological focus at the University of Parma and a postgraduate degree in Musicology at the University of Pavia. Expert connoisseur of Paganini, he has been repeatedly invited to give lectures and interviews. He collaborates with a German production company Provobis for the making of a documentary on the life of the Genoese genius. He has published as co-author the book “Niccolò Paganini, notes of a life over the top”. He was President of the cultural association "Niccolò Paganini-Parma" and is an honorary member of the "Amici di Paganini" association of Genoa. From 2020 he directs the children's choir of the Corale Verdi of Parma and, from 2022, also the youth choir. 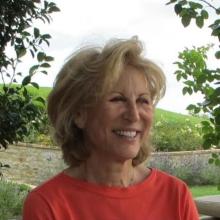 Descended from an old Genoese family, of which the Villa Croce is famous, she lived and worked in several European capitals after her studies in England. Married to Rinaldo Piaggio with whom she had a daughter, after an intense entrepreneurial experience she chooses to devote herself to culture and philanthropism. A collector and patron of the arts, she supports charitable and benevolent associations and initiatives related to important cultural institutions, such as the Prado Museum in Madrid. 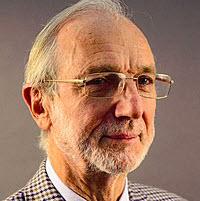 Senator of the Italian Republic, a key figure in international architecture, winner of numerous awards, including the Pritzker Prize awarded to him by the President of the United States Bill Clinton at the White House and the AIA gold medal. In 2006 he became the first Italian to be included by Time in the Time 100, the list of the 100 most influential personalities in the world, as well as the list of the ten most important people in the Arts and Entertainment sector. 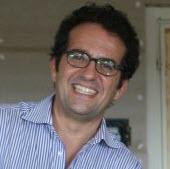 Performer and teacher, he began studying the piano at a very young age. He graduated with honors with Maestro Passaglia and gradually established himself in piano competitions in Italy and abroad. Former holder of the main piano chair at the “Niccolò Paganini” in Genoa, since 1985 he has collaborated as official pianist of the Paganini Prize. 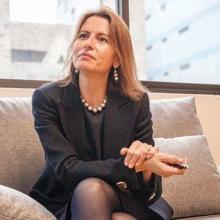 Archaeologist and anthropologist at the United Nations, she is an international expert in the documentation, conservation and management of cultural and natural heritage at institutions such as the Council of Europe, the European Commission, UNESCO and FAO. She directed the Latin America and Caribbean Unit of the UNESCO World Heritage Center and coordinated important projects for registration on the related List. In 2013 she was appointed Director and Representative of UNESCO in Mexico. As Project Manager and Curator, she developed, on behalf of the UNESCO Director General, the Special Action Plan for the Art Collection at the Paris office. A great lover of music, she has over 50 scientific publications to her credit.he. 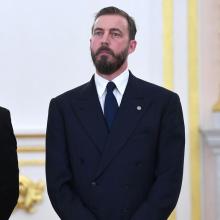 Descendant of the Royal House of Savoy, he was born in Florence on 13 October 1967 After attending the naval military school 'Francesco Morosini' in Venice, he began a brilliant career that led him to important managerial positions. In 2000 he was General Manager of Pirelli and in 2013 CEO/Managing Director of Pirelli Tyre for the Russian Region and the Nordic Countries. He has always been involved in promoting charitable initiatives around the world and supports initiatives in the social and cultural-historical field. 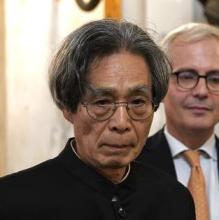 He was born in Japan in the ancient Fujiwara family, dating back to the 7th century. After his university studies in Japan, Spain and Italy (Milan) he works as a journalist for Yomiuri Shinbun in the classical music sector. He promotes and organises concerts in Japan by renowned pianists such as Crystian Zimerman, Evgeny Kissin, Lazar Berman, Andrea Schiff and Michele Campanella. Also in Japan, he organizes a series of symphonic concerts with the La Scala Philharmonic Orchestra conducted by Riccardo Muti, the Leningrad Symphony Orchestra conducted by Yevgeny Mravinsky and the Toscanini Orchestra conducted by Lorin Maazel. He works as a producer, collaborating with internationally renowned artists such as Antonio Gades, Astor Piazzola, Paco de Lucia, Bob Wilson and Peter Greenaway.